NCN Supps Shredderex provides you with an all-in-one scientifically backed complex to help you achieve a healthier body composition, increase your cognitive performance, and provide you with long lasting energy with just one small capsule per day!

Due to Shredderex’s unique ingredient combination and variety of benefits, you aren’t limited to using it in just one way! Here’s how we suggest using Shredderex throughout your day.

SHREDDEREX’s Formula, quality, and purity, are unrivaled on the market today and we have the lab tests to prove it. Check out the most recent lab results done on Shredderex. To prove that we are not just another company that lists an ingredient as “standardized to X%” we owed it to our consumers to show they are getting exactly what they paid for. Results from the lab tests proved Shredderex contains no fillers, and only what the label claims. Every single active ingredient contains 100% of the claim listed on the label.

So, what else puts Shredderex above the other fat burners and nootropics on the market today? Take a look at the supplement label and see how the ingredients synergize to give you benefits that no other product on the market can compare with.

Yohimbine HCL: Yohimbine HCL is one of the most underrated stackable supplements on the market. Yohimbine has been used for years to help with blood flow, and to aid in sexual health. Studies have also shown that Yohimbine HCL supplementation can aid in body composition and fat loss. According to a Sports Med study, a group of athletes who supplemented with Yohimbine HCL over the course of a 21 day study showed a significant loss in fat mass vs those who took a placebo (1). Yohimbine works by mobilizing fatty acids through the blood stream alongside its vasodilation properties. While there have not been a ton of studies done on Yohimbine HCL, many users report increases in body temperature, vascularity, and increases in sexual performance.

Vinpocetine: Vinpocetine is another ingredient that does not have much research done on it, however, most of the studies that have been concluded have been positive. A recent double-blind study that used vinpocetine to test increases in cognitive performance and memory in healthy adult females showed that over the course of as little as two days, memory was improved dramatically (2). Vinpocetine was also shown in various other studies to increase blood flow to the brain and help with nutrient transport. This makes vinpocetine the perfect supplement to help those nootropic-property filled ingredients to the brain. Using an ingredient such as vinpocetine in Shredderex ensures that your body is getting all of the nutrients and ingredients in the rest of the capsule.

P-Synephrine:  For those of you who have heard of the old school fat burner ephedrine, meet its little brother, synephrine. P-synephrine has a ton of positive benefits on performance, especially athletic performance, weight loss, increases in blood flow, and endurance. A recent study showed that 12 healthy male subjects who supplemented with P-synephrine showed an increase in exercise performance (total repetitions performed and volume load complete) during their workouts. This increase in performance was only amplified when stacked with caffeine (also in Shredderex) (3). This study also showed there were no negative side effects or consequences associated with stacking the two ingredients. One important note: Synephrine is banned by the NCAA and can cause a failed drug test. The best thing to do is contact your federations to find out if Synephrine is legally useable in competitions. P-Synephrine has numerous benefits related to weight loss and athletic performance

DMAE: Dimethylaminoethanol or Dimethylethanolamine is a choline molecule that has numerous studies showing its benefits in cognitive health. DMAE is naturally produced by the brain, and it functions as the precursor to choline, the nutrient in the brain that helps with neurotransmission. Choline is essential in so many bodily functions that is labeled was one of the most important nutrients in the human body. DMAE is just as crucial as choline however, because it must be present for choline to work its mind and muscle magic. For those of us who may be gym rats, DMAE is going to help us “feel” the pump and help us to visualize our muscles working. By adding DMAE to Shredderex, increases in positive mood, memory improvement, and faster neurotransmission occur because of the body having more access to choline. Think of it this way, without DMAE, your body and mind cannot reach its maximum potential! User feedback on DMAE has been nothing short of great with constant positive feedback!

Theacrine: No ingredient is quite as hot as Theacrine right now! Theacrine is one of the most stackable supplements on the market for overall performance enhancement. Users report increases in mental and physical energy, positive mood enhancement and increased motivation, improved cognitive functioning, memory enhancement, and much, much more! Not only are all these benefits positive, but when stacked with caffeine, Theacrine’s benefits seem to be amplified. A recent double-blind study on the effects of Theacrine with caffeine showed that users experienced energy, focus, and concentration all increased with just a 200mg dose. The same study showed that willingness to exercise, motivation to train, and libido all increased during the length of the study. (4)  A second double blind study showed that Theacrine, when combined with caffeine, showed an increase in energy, concentration, and mood, all while reducing fatigue (5).  Essentially, Theacrine will take whatever you pair with it and amplify its effects on cognitive and physical performance. Theacrine is the real deal, which is why we included a clinically tested dose in Shredderex.

Caffeine Anhydrous:  Everybody loves caffeine and when paired with Theacrine, there is just that much more to love! In a 2010 study properly titled “Caffeine-Not just a stimulant” studies suggested that moderate amounts of caffeine:

The most important thing was that at the end of the study, when used by otherwise healthy non-pregnant adults in safe doses, it is safe. We have known the benefits of caffeine for ages but were here to tell you some things about it you may not have known. When caffeine is paired with a nootropic, not just Theacrine, it further increases the bioavailability (usefulness) of the nootropic. Caffeine anhydrous, paired with Theacrine, paired with everything else on the ingredient list is only going to help you to focus and concentrate even harder, have more energy than you have ever dreamed of, and accomplish more in and out of the weight room than ever before.

Phenylethylamine HCL: Another big word that may take a few tries to pronounce, but we will spell out the benefits while you sound out the word. Phenylethylamine HCL(PEA) works by causing dopamine and norepinephrine to be released in the brain. Both of those hormones are responsible for positive mood enhancement, concentration, alertness, wakefulness, and focus. Dopamine is especially important because when it is released, suddenly our body can much more easily burn fat, while elevating mood and increasing focus (among other things). Due to PEA causing the release of dopamine and norepinephrine, we will gain full access to all of the benefits listed above, and then some. A current study on PEA describes it as “an immediate shot of happiness, pleasure, and emotional well-being” (7). Here’s the most important thing about PEA that isn’t always addressed; it can aid in so many benefits without risks of negative side effects or dependency. That’s right PEA is extremely safe, and at a 300mg dose in Shredderex, is the perfect amount to heighten your sense of well-being, happiness, and enjoyment of life.

As you can see, Shredderex was designed to be used as much more than a fat burning supplement with some added cognitive enhancers. Shredderall aims to increase your quality of life from multiple directions. Whether you are looking for a fat loss aid to help you get into shape for a competition or just to shed a few pounds for an event, Shredderex can make that job easier. If you’re looking for something to replace your current pre-workout or cup of coffee in the morning, Shredderex has you covered. If you’re looking for something to help you feel more motivated or productive, Shredderex answers that call! Shredderex is your all-in-one performance enhancer designed to help you become the best possible version of yourself!

Even though Shredderex can be taken in a variety of ways, NCN Supplements recommends you always assess your tolerance with one capsule first. After tolerance has been assessed, you may choose to add a capsule into your regimen. DO NOT EXCEED 2 CAPSULES IN A 24 HOUR PERIOD.

D
D.C.
The King of all Stimulants

I purchased 1 bottle about a month ago and took only 1 capsule in the morning for the first 2 weeks and another about 6 hours later. Throughout the day, I seem to be much more productive, clearer minded and motivated, in a better mood, naturally eating less than I would without even trying. After a couple weeks of using this product I had to order myself the two pack. 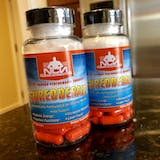 Speedy delivery! Shredderal provided good energy and focus for a good 3 hours. I let a friend try it and he already placed an order. I highly suggest providing 1 or 2 sample packets with each order. It does what it claims...I highly recommend it for those times when your really feeling tired and need tunnel vision focus.

Probably the best fat burner I’ve taken in a longgggg time and the best aid to my competition prep as well, great focus and amazing energy but not too much. Definitely recommend to anyone!

Good energy that lasts for 5 hours.

"I have tried so many different types of thermogenic and fat burners, all with the same jittery side effects with little to no results. I haven't even finished my first bottle and have already ordered more!"

"We loved Shredderall and it’s something that we can safely say can be used on a recomp phase, a cut, or even if you want to make sure your bulk stays as lean as possible!"

"I feel a major shift in energy and focus as soon as I take it. Excellent for working out or simply taking on a long day/project. Highly recommend. Great price for the number of capsules"

"Great product! Shredderall was a big help losing weight before my wedding. 15 lbs. without changing my lifestyle much. I watched what I ate and didn't change my activity level. I've never lost weight that fast."